I still haven’t had a chance to finish putting the LA post together, so here’s a little teaser for you! Here is a picture from last Friday to keep you interested!

Stacey & I were able to visit The Tonight Show. We sat on the floor on the second row (there’s only two rows). About 15 minutes before the show went live, Jay came out to warm up the audience(before he went to put his suit on). When he was done going over how the show works, he asked if anyone had questions. There were a group of cheerleaders from Canada in front of us & one of them asked if they could have their picture made with him. He invited them up & someone on the crew took a Polaroid of them. He asked again if anyone had questions and a guy raised his hand & he and his two children went up on stage to do the same. I leaned over to Stacey and told her if he asked again, I was going to raise my hand. She said no, but I did it anyways! So…. we got to go on stage and visit with Jay and have our picture made! He was asking about where we were from & what we did for a living. When I said that I was from Oklahoma, he made a joke about having flushing toilets, he also tried to make funny jokes about me being in the mortgage business, but I told him I worked for Chase & we were secure! He was also giving Stacey a hard time! It was cool!

The show was interesting…Michael Douglas, Travis Smiley & Good Charlotte were the guests. Of course I DVR’d the show before I left town just in case we were on TV! Good thing I did, because we were. We were standing up around the stage when he came out & you could see us shaking his hand & clapping!!!! Then you could see the back of our heads! It was a fun day! 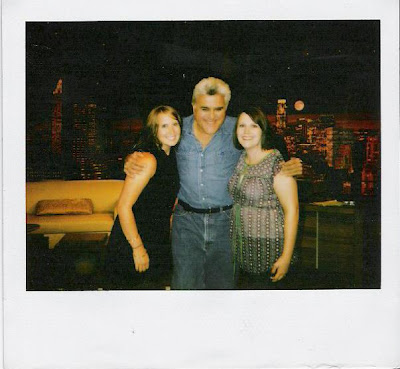