Saturday morning I decided to try out the new exercise bands and yoga/pilates dvd I bought myself. I quickly realized that it would be impossible to work out with Jaxon by my side because HE wanted to “exe..sise”. He was so funny to watch, he really tried to follow the girl on tv. When it came time to attach the band to the door, he wanted me to hook it up for him! He’s so silly…but SO serious! 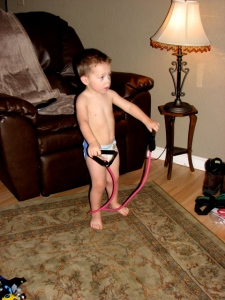 As you know, Jaxon has a thing for closing his eyes when I say ” say cheese”. He thinks it’s the most hilarious thing ever! So, I guess I’ll have a series of closed eyes pictures!

Last week we started eating much healthier! I am really enjoying it! I can’ wait for the farmers market to open up.

Hope you’re having a good week so far!

24 thoughts on “My role model”