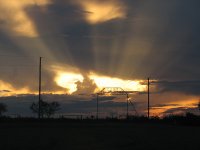 Camp Lu-Jo Kismif
Lu-Jo stands for Lucille Jones – she donated the land for the camp in 1960.
Kismif stands for Keep It Spiritual Make It Fun

For those of you who know me from growing up, you know that Camp Lu Jo has a VERY special place in my heart. For the rest of you…..here’s the story.

There once was a little girl who was four years old, her name was Suzanne. Her parents volunteered a week each summer to be on staff at Camp Lu-Jo Kismif. The little girl is now 29 and she has spent a total of 20 summers of her life at Camp. She never missed a week of camp until about 5 years ago. There were many summers she went two weeks instead of one. Once she was out of school she went back to be on staff with her husband. By the way, she met her husband there. They had known each other for a few years but one year that all changed. He was going to be a freshman in college and she was going to be a junior in high school. Here’s the story of how it all came to be.
The next summer, he was about to enter his sophomore year at OC and she was going to be a senior in high school. She had just had knee surgery about 3 weeks before camp, but couldn’t bear to miss it. Luckily for her, there was a boy named Joey that was super sweet. She was quite the klutz and walked into a hole the first day of camp and twisted her knee she had just had surgery on! She ended up in the ER and needless to say…in bed pretty much all week. Some would say that it was a pretty crappy week of church camp. Little did she know it was a life changing week, but she wouldn’t find that out for a couple of years.
Well, that boy named Joey took care of her that week. She really didn’t know him well at all and didn’t understand why he was being so nice to her. He would come and visit her several times a day. He made sure she was fed and any time she needed to go down the hill to the main camp area, he would carry her down. Each of them had a bf/gf at home, so there was nothing really there. At the end of the week they agreed that they would keep in touch during the year. She was planning to attend OC the next year and had trips planned to visit.
So camp had come and gone…the after camp blues had set in and especially so for her. She didn’t realize that she really felt something for this guy until she called his house to talk to him and his dad told her that he had gone to the city to visit his girlfriend. She didn’t give up yet though. She sent a few cards and notes throughout the year. Then the time came to make a trip to OC. Once there she ran in to Joey and he really didn’t give her the time of day. Needless to say she was crushed but moved on and enjoyed her senior year of high school.
Once summer rolled around and the week of camp had arrived Suzanne wasn’t sure if Joey was going to be there or if she even wanted to see him. She was at camp but trying to decide if she wanted to stay or go. Before it was too late, she saw a little red ford ranger pull up and her heart sank. It’s what she didn’t know yet that would change her life forever….To be continued.