Last Thursday night I had plans to meet my sister in law, Amanda for dinner.  She was coming to town with a group of women from her church for the Women of Faith Conference.  About 7:45 it was time to head to the restaurant.  The restaurant just happened to be right across the street from where THE Pioneer Woman was signing her brand new cookbook!!

I decided to make a little stop in at the bookstore before heading across the street for dinner.  The signing was to be from 5:30-8:30.  By the time I got there it was almost 8… so I figured I might have a chance!  Oh, I was So, So wrong!  The line was absolutely amazingly long.  Crazy long.  I ended up running into Janell and Bailey who had been in line for 2 hours already and had moved about 30 feet.  They were so kind to let me hang out in line with them for a while.

After moving two feet in about 30 minutes I knew there was no way to meet Amanda and meet PW.  I found out that there WAS a way to have my book signed though!

I dropped my book off at the counter and then snapped some pictures of PW!  I only felt slightly like a stalker! 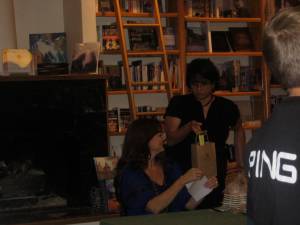 As I was leaving, I noticed a face I knew… Amy from Mom spark.  I’ve “known” her for a while, but we’ve never met in person!  I can’t believe we didn’t get a picture together… but Amy had a brilliant way to get a picture w/ PW woman!! 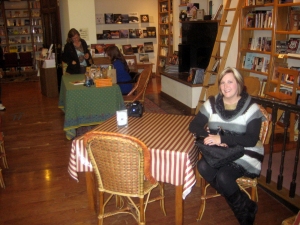 I DID get to meet my sweet sister in law for dinner at Cheesecake Factory and man was it good!

6 thoughts on “the time I tried to meet Pioneer Woman!”